He Keeps Texting But Doesn’t Ask You Out 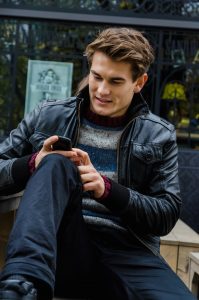 Does he keep texting you but isn’t making plans to see you?

Jane, a funny forty-something year old lawyer, was texting with hottie David on a dating app. At first they seemed to hit it off big time, but after several weeks he still had not asked her out. Frustrated, she stopped responding to his messages. Yet, he kept texting and trying to reignite the conversation.

Here’s another situation: Fun-loving publicist Melissa had been dating Kyle, a cute IT guy, for a few months. Then, he started acting distant. Over a matter of a few weeks, he went from acting excited to see her and pursuing her to spacing out dates. Yet, he kept texting almost daily.

Then there’s 55 year old Arlene. She had just gotten back into dating after a tough break up. Arlene was thrilled to have the best first date with Ben, a cute younger finance guy. In fact, they discovered that they had tons in common and off-the-charts chemistry. After a magical kiss goodnight, he suggested they get together again. She said she’d love to. Yet, over the next few weeks, all he did was text.

Do any of these situations sound familiar?

It can be really frustrating (not to mention confusing!) when a man keeps texting you but isn’t asking you out. This happens all too often. If this is happening to you, check out this video:

It’s a strange double-bind that can happen for a number of reasons– which all have nothing to do with you! As an example, he could be shy about making a move. Or perhaps he is simply not sure what he wants. Heck, he might even have the worst zit on his forehead. The truth is, you could speculate all day with your girlfriends and still never know why he’s texting and not making a move to get together.

RELATED POST: HE BROKE MY HEART AND STILL CONTACTS ME

If He’s Only Texting Make These Moves

Don’t waste your time analyzing. So if you like him, take one of these steps:

In the end, dating is a numbers game and you want to weed out the DUDs (Definitely Unworkable Dudes) asap. If he only texts and isn’t making a move after you attempt these steps above, it’s time to move on. Remember, look for someone who is crazy about you—which translates into eager to see you!

RELATED POST: HOW TO BE A HIGH-VALUE WOMAN & NOT SETTLE

You absolutely deserve a great partner who knows just how wonderful you really are.

So if you’re struggling with guys who text but don’t ask you out, get in touch with me today to receive a personal gift from me to you. In fact, I will buy you an introductory 40-minute session with a gifted dating coach by phone or Skype. This is time-limited, so Click Here to change your life.