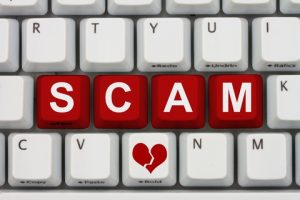 According to the latest FBI figures, singles (mostly women) lost more than $362 million through online romance scams. This blog lays out the latest online dating security tips and the red flags you should watch for.

These scammers are very clever professionals who know how to get women to fall in love with them, without ever meeting in person! This occurs even to  sophisticated, intelligent or educated women!  Because organized romance scam rings  actually use strategic protocols and precise tested scripts.

I have seen this first hand when two women in different cities who had just started our Love Mentor® coaching program, were asked to send money to their matches and the requests were worded the same and came in on the same day!  One of the women was seriously considering sending the scammer her money, that is, until she talked with me, thank goodness! Today’s scammers truly know what they are doing.  But the good news is that you can easily avoid these criminals by using these nine key online dating security tips.

Scammers  often claim they are:

Online Dating Security Tip 2: Lives or works outside of the country

For North Americans, it is important to know that romance scams are the specialties of international scam artists. Look at the list of false occupations above that scammers favor. For overseas readers, be aware of foreign nationals who work in the above occupations.

Online Dating Security Tip 3: Appears to be too wonderful

He is self-employed, rich, has a Master’s degree or higher. Plus, he/she loves you madly and may refer to you as a Soulmate immediately.  He is so thoughtful in his understanding of you and super responsive to your messages.  Finally, he appears to be totally smitten with you.

He may want to email you directly rather than on the dating site. Or text and talk to you via an international app like Whats App.  This is because he is using a fake name and email address and it will make it harder to catch him.

His computer crashed and died, he has a dear family member in need of help, or had a tragic accident out of the country without access to needed cash, and/or just lost his wife, etc.

He says no one could understand the extraordinary Soulmate love you share so it is best not to talk about it. This is so your family and friends will not stop the scam.

These cons are so clever that they can make this insane request seem entirely reasonable.  If he is playing you for a big amount of money, he may even offer to give you some money to prove he is not a scammer and get your information.  Asking for your financial information is a true scam marker.  Block him and bow out immediately.

Because he needs help with the sob story mess you learned about earlier, the scammer may ask you to give him money directly.  Once your money is sent overseas it is usually unrecoverable. This is another true online dating security tip and scam marker. Be sure to block him and head for the hills.

Or the scammer may ask for your help in moving large sums of money.  This may involve you opening a new bank account, which the scammer will then use to facilitate criminal activities.  Or he may ask you to transfer large sums of money from one bank account to another using your computer.  The scammer is transferring stolen money to another account which is controlled by the fraudster (money laundering).  The FBI has recently issued a warning about this new kind of romance scam, which is referred to as being used as a “money mule.”   If you comply with money transfer requests you are unknowingly aiding and abetting a crime and you could be charged. This is a critical online security tip.  If it has happened to you already, be sure to cut off all contact with the scammer and report it to the FBI immediately.

If you suspect a romance scam, conduct a search.  Copy the photos from his profile and run them through a reverse-image search engine, such as TinEye or Google Images. If the images come up associated with a person who has another name or lives in a different city, you may have good reason to suspect they were stolen. And if you’ve been communicating with someone by email, check their address at a site such as Romance Scams, which compiles lists of email addresses belonging to known scammers. The website Scamalytics maintains a blacklist of scammers who use false pictures.

Online Dating Security:  An example of a scammer in action

Marcy was a very bright,  well-educated 51 year-old who worked as a college professor. She met John, who claimed he was a 55 year-old gemologist, on a major dating site.  John came across initially as endearingly shy.  Over the course of the first week of their messaging on the site, he seemed to find his voice and started writing Marcy very loving messages saying that she was very special and he had never ever felt the way he felt about her.  He would lovingly  ask about her ailing mother and grown-up kids. Marcy felt appreciated and courted.  Her mood soared.

John asked if they could connect via Whats App since he might be assigned overseas.  Marcy was suspicious, but he quickly gave her his full name and a local home location.  Marcy went to Google and found that there indeed was someone with that name at that address. Now she felt good. She had checked him out and he was apparently legit. In fact, she wanted to find that he was for real since his messages made her feel terrific and excited in a way that nothing else in her life did.

Suddenly, in week two, John announced that he had to go to Turkey to work on a big assignment at a gem mine.  He was very upset about not being able to get together in person with Marcy.  He talked about how his heart yearned to be with her. To see her beautiful face.  To touch her.  She reassured him that they could continue to connect on Whats App.

Online Dating Security: Watch for The Bait and the Hook

In month two John texted and called Marcy daily.  She knew she was falling in love with him and when he said she loved him her heart practically exploded with joy.  Soon thereafter, a very worried John, told Marcy that his computer had malfunctioned.   Marcy was concerned.  John said that he hadn’t received his paycheck. But he really needed a computer desperately.  He asked if he would borrow the money to buy a new one.  When she said something like, this sounds like a scam, John reassured Marcy that he didn’t want her money if it would come between them since he loved her too much.  He continued to talk to her daily in a very loving way.  The next month, a depressed-sounding John told Marcy that he still had no computer and that he could lose his job. Finally, Marcy agreed to loan him the money.

Marcy was feeling uneasy about the relationship at this point and contacted us for a coaching session.  Her coach pointed out how John met many of the red flags listed above.  He claimed to be in a scammer type of profession. He worked overseas. John acted too wonderful too soon. Then when he could, he rapidly left the dating site to go on an app. And finally, he manufactured a sob story and asked her for money.   Marcy’s coach suggested that she take the photos of John and run them through a reverse search on TinEye.  One photo came up as an entirely different man.  Marcy was horrified and heartbroken.  She immediately cut off all contact with John.  This was a very wise decision on her part!  John could have gone on to scam her out of tens of thousands of dollars!

If you are dealing with someone who fits even part of the profile in my online dating security tips, or if something does not feel right in a relationship with a man you met online, go ahead and have a free session with one of my expert dating coaches.  So get help right away to assess the situation before you suffer a lot of loss, both financially and emotionally.